When I published my travel bucket list last year, Shannon (check out her blog eyemasq) immediately recommended I add Cambodia to that list. Her enthusiasm and her blog post on her travel there had me hesitating, and when AirAsia came up with a sweet deal, I snapped at the opportunity.

Cambodia was…truly remarkable. To start off, I was totally impressed with the locals; soft, polite, and surprisingly good English that they learn from the many tourists that flock around the temples and ancient ruins. Our hotel staff were extremely accommodating – we landed in Siem Reap at 7 am on a weekday, and they arranged airport pick up (by tuk-tuk, more on that in a bit) and also let us check in as soon as we got to the hotel. Now I have stayed in many hotels, but I have NEVER ever been given a room before noon free of charge. Additionally, they let us check out late FOC (around 3.30 pm) and always left the key in the key slot in the bedroom to keep the air conditioning running, so that we could come back to a chilled room after our exploring. Probably not very environmentally friendly – but such intentions went out the window the moment I landed. Temperatures of around 35 degrees Celsius – yikes!

Our first sight in Cambodia was of the vehicle which we would be using over the next few days – the tuk-tuk. Though I have seen and used these before in other parts of South East Asia, this one was different. It was a four-seater attached to a motorcycle, and hence different from the tuk-tuks of Thailand and Indonesia, which have a two-seater attached to a bicycle.

All shop attendants spoke in the same tone, a soft lilting one. “Hellooooooo ladyyy, one dorrar!” was the phrase I had at least 20 times an hour, with some postcards or loose cotton pants being shoved in my face. There was absolutely no begging, even with the amount of poverty in the country, but kids used gathered around and try and sell things, saying “please buy so that we can go to school”. Which worked, because it broke my heart. Until my tuk-tuk driver told me that education was free in Cambodia up til grade 12. Grrr!

Though many people were killed during the war, post war population has increased. Our guide himself has eight siblings and had moved in to the city, staying with his uncle and funding his university studies in English Literature through his earnings as a guide. That itself impressed me – who’d have thought someone with a poverty-stricken background in a non-English speaking country is studying English Lit? I have so much respect for him. Of course Cambodia is a very unlucky country to have survived so many wars that destroyed their wonderful architecture, but they are slowly coming out of it. Tourism is the main thriving industry and they rightly deserve all the attention and hype over their temples. The carvings are gorgeous, the history even more so.

An old lady inside one of the temples we visited inspired me so much that I don’t think I’d ever forget her. She was so old and bent, but came in everyday, in the heat, to the same spot in the temple ruins, smiled her toothless grin, and tied a charm around the wrists of whoever cared to go to her to ward off evil spirits. She muttered a prayer under her breath, and then made a whooshing sound to get rid of my ‘negative aura’. I gave her a big hug. Her smile itself was worth the USD $1 we gave her. God bless her!

There’s one street in Siem Reap called Pub Street, which is near Old Market and the Night Market. These streets are absolutely filled with restaurants, bars and massage parlours (not the hidden meaning types – when I say ‘massage’ that’s exactly what I mean 😉 ). There were almost twelve Indian restaurants in Siem Reap alone. But surprisingly very very few restaurants had air conditioning, even though they were all in the ‘good’ category. In fact, we went into one restaurant simply because they had air-conditioning, which was advertised outside in large block letters.

(NOTE: Siem Reap is NOT a holiday destination for kids and the elderly (who have problems walking). I was amused to see a kid howling “I NEVER want to come here again” and the poor mum sweating it out. Also, read a lot about the place’s history if you really want to enjoy the different temple sites. Otherwise one temple is as good as the others!).

Just posting a few pictures from my trip, check out my gallery below: 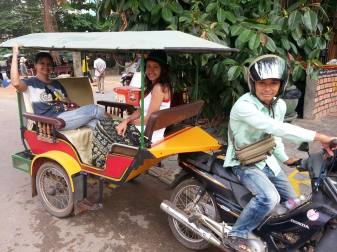 With our tuk-tuk driver

Never seen anything like this before – a rainbow ring, only visible when the sun was behind the cloud

Angkor Wat with the reflection

Poor elephant. We didn’t want to all get on one elephant, but the attendants insisted.

The loose cotton pants I bought – perfect for the weather! 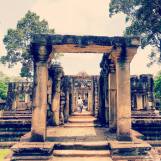 The entrance to the Elephant Terrace

4 responses to “Impressions from Cambodia”

seeing the world in high definition

we were born naked onto the page of existence; with nothing but the pen of our soul to write ourselves into eternal ecstasy ~ DreamingBear Baraka Kanaan

this is... The Neighborhood

the Story within the Story

... and it is ever changing

the CITIZENS of FASHION

Beauty through my lens.

Museum of Documentary and Fiction

Beautiful photos of hiking and other outdoor adventures.

Self confessed kiwi fitness fanatic blogs about his random musings...

Fashion for the average man

THE MIND OF RD REVILO